Progreso Bridge and Nuevo Progreso. Their history is intertwined.

The Progreso/Nuevo Progreso International Bridge has been in operation at this location since 1952. During the first years of operation the bridge had relatively low crossings of pedestrians, automobile, and commercial traffic. When it opened, it was open 5:00 am to 12:00 pm. Toll was Southbound only. Beginning in the 70’s, an increase in all three categories of crossing was seen. In 1981 Cargill, Inc. constructed an elevator here for the exportation of corn and grain to Mexico. This exportation of agriculture products continued to grow to the point that four elevators are now exporting agriculture products to Mexico (corn, grain sorghum, cotton seed, beans, and popcorn). With the signing of the NAFTA agreement, a substantial increase in commercial traffic in both directions has developed and a new bridge was seen as necessary.  Pictured below is the original bridge taken about 1960. 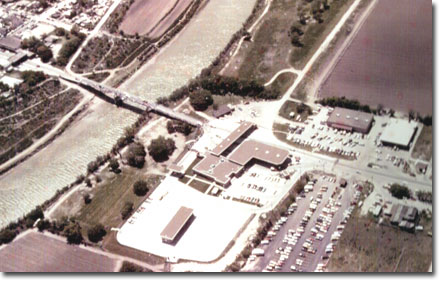 The State of Texas recognizes the importance of the Progreso Bridge. From 1993 through the end of 1997, the Texas Department of Transportation invested over $10 million in FM 1015, which connects to US 83 and points north. TxDOT invested over $5 million more in 1998 and in 1999 to provide for five lanes of traffic. 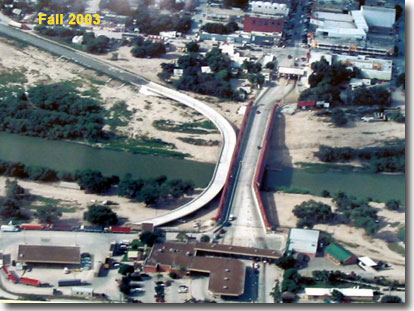 The new bridge was completed in 2003 and has been an instant success. With it’s broad covered walkways on each side the walk across has become a delight. Four lanes of traffic speed the flow of cars going either way. The soon to be opened truck bridge, located to the East side, will remove the heavy truck traffic and will make the crossing even more pleasurable.

Bridge traffic has been very substantial over the past decade, both Southbound and Northbound.  Since 2000, about1.25 million pedestrians cross the bridge each year.  Another million cars make the Southbound crossing.  Truck and tour bus traffic has also increased steadily.  Much of the truck crossing now carries grain, primarily corn for tortillas, to Mexico.  Very little truck cargo crosses from Mexico, although this is expected to change with the opening of the new truck bridge.

The Port of Entry building will soon be remodeled.  Pictures of the architect’s views of the facility are shown below.

South side entrance which you’ll see as you return across the bridge into the U.S.

The concourse will be broadened and upgraded. There will be three counters to handle the crush of returning shoppers.

This is the North side, which most people ignore as they head for their cars.